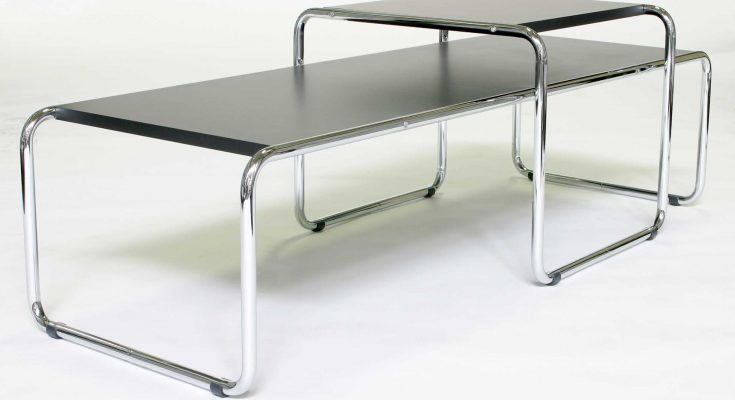 The Bauhaus, founded in 1919 by Walter Gropius, was founded in Weimar through the union of a local art school with the Grand Ducal Saxon School of Applied Arts Weimar, founded in 1907. The Bauhaus movement represents a powerful and significant stage in the history of culture and architecture of the early 20th century, especially in Germany during the Weimar Republic. The holistic view of the Bauhaus movement sought to merge all areas of art in ideal unity.

In particular, the manual aspect of artistic work should in this context again be given more weight than academic training. This required special new practical-pedagogical methods that should end the isolation of the artist who was removed from the world.

In 1925 the theoretical conceptions became reality a second time with the relocation of the Bauhaus in Dessau. As a result, the merging of industrial production and aesthetic-functional design became even more possible and became the leitmotif of a whole movement.

With the charismatic Bauhaus movement, Germany experienced a new classic modernity in the conception and implementation of a rational designer furniture culture. The diverse influences of the Bauhaus artists are in spite of or even because of the expulsion from Nazi Germany in 1933 to this day unmistakable, which is reflected not least in the furniture design designed in the Bauhaus and preserved to this day furniture designs.

In addition, it makes sense to see furniture created at the Bauhaus “as part of cross-border, longer-term trends” (Wikipedia) and classify it under terms such as Functionalism, Classical Modernism, New Objectivity, International Style, New Building “(ebda.).

As a teacher  in the Bauhaus workshops u.a. legendary artists such as Lyonel Feininger (printing), Johannes Itten (stained glass), László Moholy-Nagy (metal workshop), Walter Gropius in the carpentry or Oskar Schlemmer and Wassily Kandinsky in the wall painting. Walter Gropius, Ludwig Mies van der Rohe and Hannes Meyer are names in the field of architecture.

Le Corbusier was born in La Chaux-de-Fonds, Switzerland. There he studied furniture design. Other places of his life were the work in Paris in Auguste Perret’s architectural office (1908). 1910 and 1911 enabled trips to Germany, where he met Wolf Dohrn, the director of the Dresden workshop and Hermann Muthesius and Peter Behrens. At Wolf he worked for a short time in his office. From 1912 to 1914 he taught architecture at the School of Art of La Chaux-de-fonds.

In Paris, he developed the art direction of purism on his return together with the painter Ozenfant. In 1923, Le Corbusier published the book “Verse une nouvelle Architecture”, in which he set out his conception of modern building in general terms. Le Corbusier was a member of the Congrés Internationaux d’Architecture Moderne. He was in his lifetime and is still considered one of the most renowned architects of his time.

In addition to the armchair LC1, which is available in leather and chrome, you will find the chaise longue (LC4). As a series, you can purchase the LC2 and LC3 series like the Grande Comfort series. These workpieces are available as armchairs and sofas in two- and three-seater versions. The revolving chair LC7 and the legendary Corbusier glass table LC 6 are also included in the range of Corbusier designer furniture.

Ludwig Mies van der Rohe, born in Aachen, was a draftsman, architect and designer. After completing his training as a master builder, he worked as a draftsman for stucco ornamentation with an architect from Aachen. van der Rohe became a member of the November Revolutionaries, later vice-president of the Deutscher Werkbund (1926) and last director of the Bauhaus before it was closed.

After his emigration to the United States in 1938, he was appointed professor in Chicago. We still associate his work with the construction of the Weissenhofsiedlung (Stuttgart 1927), Villa Tugendhat 1929/30 in Brno and the exhibition pavilion in Barcelona. In addition – also here in this online shop – brilliant designer furniture reminds of Mies van der Rohe. These include the famous Barcelona armchair and Brno, the Chaise Longue and the cantilever MR. 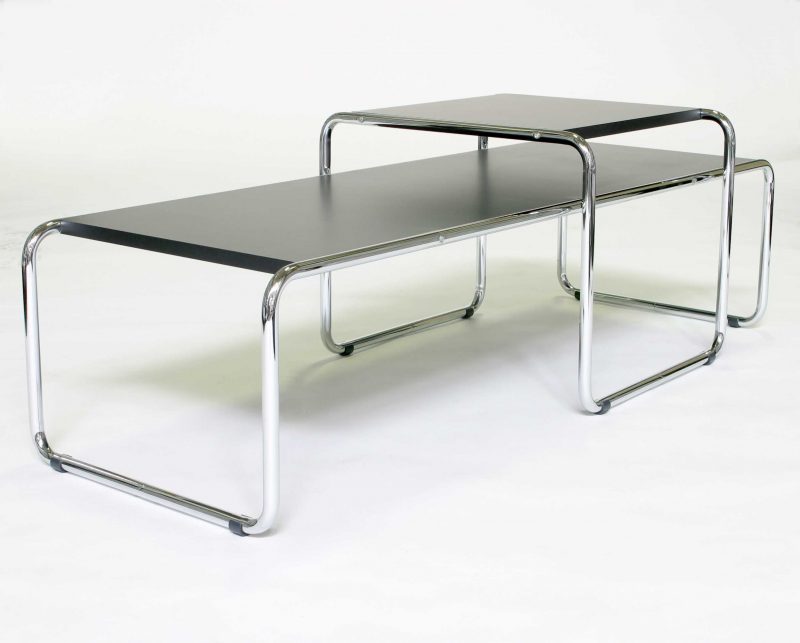 Marcel Breuer was born in Hungary and worked temporarily in Vienna in a Viennese architecture office. Later he studied at the Bauhaus in Weimar (1920 to 1924), where he was appointed Formmaster of the furniture workshop after his apprenticeship as a journeyman. He also held this position after the move of the Designer Furniture of the Bauhaus to Dessau, went to Berlin in 1928 and opened his own architectural studio there. After the seizure of power by the Nazis Breuer emigrated to London in 1935, where he opened an architectural office together with his colleague Yorke.

It followed shortly after an episode with Isokon as head of the design department. At the second station of emigration at Harvard, he was offered a position as a professor at the School of Design, which gratefully accepted Breuer, who had emigrated to the United States in 1937. After the end of the Second World War Breuer founded the company Marcel Breuer & Associates in New York, which he managed until 1976, before he retired.

Have a look at the legendary armchair Wassily, the cantilever chair Ceska and the side table Laccio.

Harry Bertoia is from Udine, Italy, from where he first immigrated with his family to the United States. In 1936, Bertoia graduated from Cass Technical High School, Detroit. In the following years he lived as a scholarship holder of the Cranbrook Academy of Arts.

From 1939 to 1943, Bertoia ran the Cranbrook Metalworking Studio, which he himself had set up. In 1943, Bertoia married Brigitta Valentiner. He later worked with Charles and Ray Eames at the Evans Products Company, where he developed technologies for the molding of laminated plywood. During the war he specialized in the production of jewels. After the war, Eames worked in the Plyformed Products Company of Charles and Ray Eames in Venice (Cal.). The famous wire chairs (such as the “Diamond Chair”), which he designed for Knoll International in 1951, brought tremendous material success, but initially had to be changed in the execution due to patent appeals. From then on he devoted himself almost exclusively to sculpture.

You will also find his classic Wire Chair inspirational.

Charles Eames was from St. Louis, Missouri, where he studied architecture at the Washington University. He received a scholarship to the Cranbrook Academy of Arts, Michigan in 1936, where he later returned and accepted a teaching assignment. Harry Bertoia was another famous designer of that time, who taught at the Cranbrook Academy. Ray Kaiser, whom he married in 1941, also belonged to the quorum.

Eames was responsible for the manufacture of arm and leg splints for the US Navy in World War II, which were made of plywood. For this project, he developed a new method to deform layer-glued plywood.

In 1946, Eames was honored with the first ever solo exhibition in the ‘Museum of Modern Art’. From then on, Charles and Ray successfully cooperated with producer Hermann Miller and stood for a rational furniture design that convinced renowned clients such as the US government and the IBM Group.

The works of Charles Eames include the revolving lounge chair and the associated ottoman. 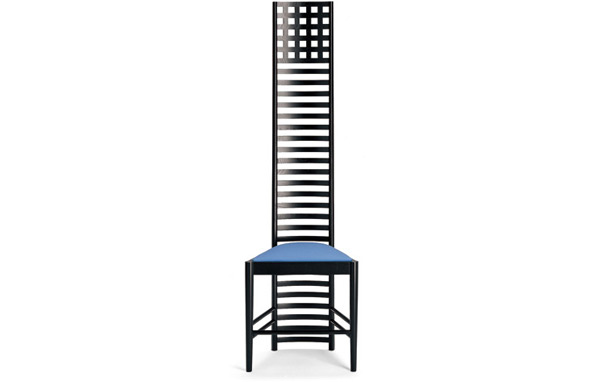 Charles Rennie Mackintosh completed an internship in 1884 in the Glasgow office of architect Hutchinson. In 1889 Mackintosh was hired by the architectural firm Honeyman & Keppie.

Since 1896 Mackintosh worked on designs for furniture and introduced us under the name The Four together with H.J. MacNair, Frances and Margaret Macdonald workpieces out.

In 1897 he was responsible for the interior design of Tea Rooms a Miss Cranston in Buchanan Street. In addition came designs for furniture from Tea Rooms the lady in Glasgow’s Argyle Street. 1904 followed the Tea Rooms on Willow Street.

In 1900, participation in the exhibition of the Vienna Secession followed. In 1903 Mackintosh built the Villa Hill House in Helensburgh. In 1904 he designed the Tea Rooms on Willow Street, again for the already mentioned Miss Cranston. From 1916-1923 Mackintosh lived in London; the last year of his life he stayed in France from 1923-1928. During this time, painting played a major role in Mackintosh’s daily routine.

Among his famous creations are the chair Hillhouse and the armchair Willow.

Many art lovers associate with the term Red & Blue or Red / Blue the Bauhaus table lamp and armchair by Gerrit Rietveld, an artist from Belgium. Gerrit Rietveld was born in Utrecht, the son of a carpenter and learned this craft because even with his father and worked as a self-employed person in this profession from 1911. 1917/18 designed Rieveld, who worked in architectural drawing at P.J.C. Klaarhamer continued his legendary Red & Blue chair. The draft appeared in the Journal of the Movement and also appeared in 1923 at the Bauhaus exhibition. Also known are Rietveld’s natural wood chair Zig Zag, the Schröder House (1924) – one of the most important architectural works – and the eponymous side table. Rietveld later experimented with furniture made of slatted boxes, chipboard and plywood. 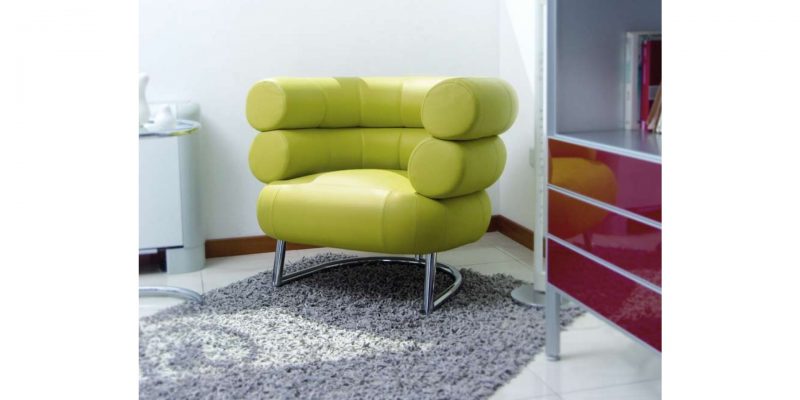 Eileen Gray grew up in a wealthy family of artists in Ireland. Gray, the u.a. stands for the conception of modern lacquer art, first studied from 1898 to 1902 at the Slade School of Art in London. In Paris, where she lived in succession, she studied painting at the Académie Colarossi and the Académie Julian. In Paris she participated in the exhibition of the “Union des Artistes Modernes” in 1922 and in the same year opened the Galerie Jean Désert as a showcase for her own designs. From 1926 she worked as an interior designer and presented works at the 1937 Paris World’s Fair. Eileen Gray represents a considerable artistic spectrum, the Tubelight floor lamp, the E-1027 side table, the Bibendum armchair, the Lota sofa and the Day-Bed lounger.

Mart Stam was a native Dutchman. Stam received his education in Amsterdam between 1917 and 1919. Thereafter, Stam Zeichner was employed in an architectural office in the port city of Rotterdam. Other milestones of his career were 1922 Berlin, Amsterdam, Paris and again Amsterdam.

In 1926, Mart Stam constructed his first cantilever chair. In 1928 Stam became a founding member of the Congrés Internationaux d`Architecture Moderne. At the beginning of the thirties, Stam even worked as a city planner in the Soviet Union. After 1945 Stam worked for quite some time in the former GDR (Dresden, East Berlin). From there he moved to Switzerland in 1966.

Quick and efficient ways of freshening up your home

Save Energy with Natural Light